In this WWE 2K19 promotional Teaser Trailer, Jeff Hardy is in the house at the WWE performance center to share his knowledge with the NXT roster. Will the WWE universe witness the best wrestling game of all time when 2K19 drops? Video also features AJ Styles, Triple H, Undertaker, Great Khali & More.

It’s that time of the year once again, it’s time for the WWE 2K19 hype season. Which features and gameplay modes would you be super excited to witness restored to the game’s freshest edition of 2k’s giant wrestling game? Do you want to see GM Mode make a comeback to WWE Games?

Twist of fate that subscribe button for more WWE 2K videos, normally 2 or 3 a week. 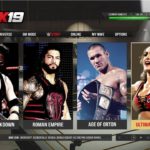