During the latest edition of the “conversation with the big guy podcast”, Ryback spoke about a variety of topics. Here are the highlights (credit to WrestlingInc).

His opinion of Roman Reigns:

“I love Roman Reigns,” Ryback admitted. “I think most of the guys there [in WWE do as well]. I think it’s a whole different dynamic than [the situation with John] Cena. I think more guys [like Reigns]. He works really hard, but he’s always very humble. He is very [respectful] and he never walks around backstage with an ‘I’m better than you’ attitude. So, to me, not to say that John does that or anything. It’s just that Roman comes off different. I don’t know if it’s from being raised in the business and whatnot. But I’ve worked with him very closely over the years, especially early on, so and the guy can go and he’s super talented, so I’m happy for all of his success.”

His thoughts On WWE airing Raw live on Christmas:

“It is the hardest lifestyle. It’s not like any other sport or any other thing because there’s no offseason.”

“Whether it was USA’s idea or Vince’s idea, who knows whose idea it was? But they’re looking at it as a way to make money and the problem with that is you’re dealing with human lives.” Ryback continued, “we have all these other days of the year we could run. We could do two tapings the week before. I just feel bad for the guys because they have no choice. No one can say anything there. I guarantee you not one of them wants to be there.” 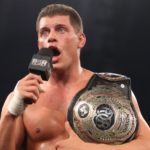