WWE 2K19 Roster With every superstar confirmed so far including Pre order superstar Rey Mysterio! Mysterio makes his 2K return in this years version of WWE Games for the first time since 2K15!

Superstars have been confirmed via WWE promotional material as shown on Smackdown and promoted by 2K. Please note the full roster reveal is yet to take place, these are only the early reveals that have been found via the TV spot. WWE 2K19 will be released on October 9th for PS4 & XB1, but It doesn’t look like it will be on Nintendo Switch!

Please check out our music partners ONLAP and support their new music!

Be sure to leave your comments below with your opinions with which features you want to see back for WWE 2K19!

Big thanks to the #ELEMENTALS that always return to the channel to watch the new content! I SEE YOU! 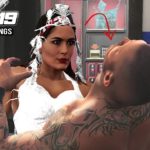