Randy Orton has strongly hinted that his future may lay outside of WWE after he posted a collection of cryptic tweets & instagram posts. Orton signed a 10 year contract with WWE back in 2010 and has made no secret of his desire to leave the company, however many believe that Orton is deliberately creating the AEW rumors in order to leverage a better deal from WWE, ideally a deal with more money & less dates.

Orton’s former stablemates from the short lived #FTRKO are also soon to be out of contract, and they have also added fuel to the fire by suggesting Orton & The Revial could potentially link up further down the road, potentially in All Elite Wrestling. 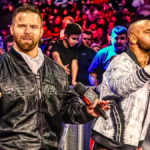